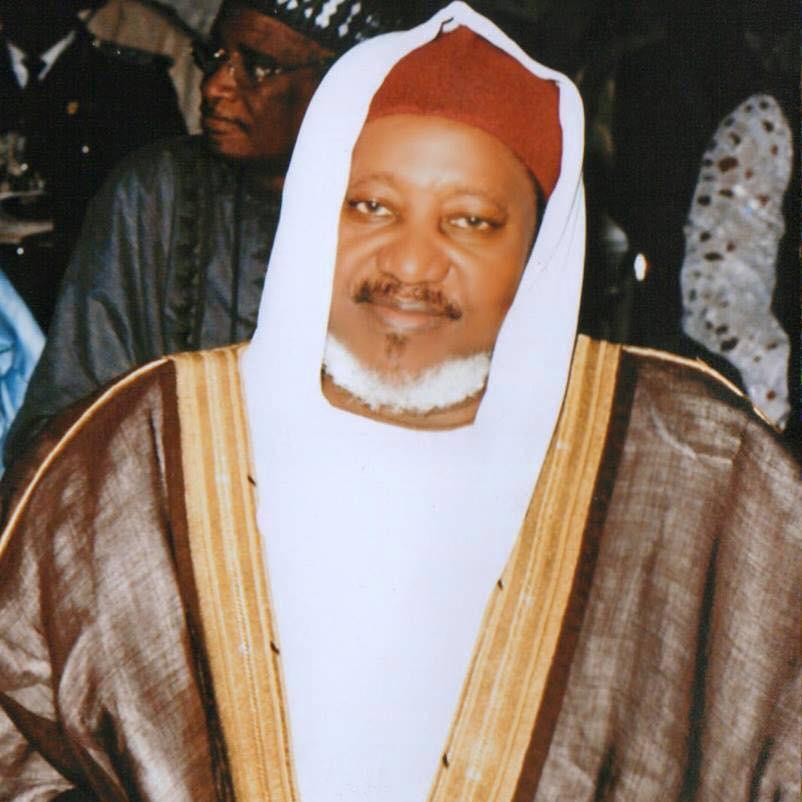 Sheikh Sharif Ibrahim Saleh Al-Hussaini was born on a Saturday night, on 12th May 1938 in Aredibe, a nomadic settlement of the Shuwa Arabs, near Dikwa in Borno State. His father, Sheikh Muhammad Al-Salih bin Yunus Al-Nawwy, was a renowned Islamic scholar and a devoted Muslim. His mother, Fatima bint Sheikhh Muhammad Al-Bashir Al-Hussaini, was a very generous and pious lady respected by all in the community. She was also a disciplinarian with unquenchable passion for knowledge. Having lost her husband when their child was only seven years old, she took over his training to maturity. Undoubtedly, she was the single most important influence in his life that made it possible for Sheikh Ibrahim Saleh to be a world-class scholar today. For instance, she once rejected his proposal to abandon the search for knowledge in preference for trade in livestock, when he was only fifteen years old. She became visibly alarmed and withdrawn, an attitude that frightened her young son and brought him back on the track.

Sheikh Ibrahim Saleh was introduced to the world of Qur’anic recitation at a very young age, being always with his father, who spent most of his nights in offering supererogatory prayers (nawafil). As a result, the young Ibrahim memorized many chapters of the Book even before he commenced its formal study. Many senior students studying the Qur’an under the guidance of his father were intrigued by Ibrahim’s intelligence and the ability to correct them, while they were far ahead of him. His family members, on both sides, were great scholars that did their best to expand the frontiers of religion through the dissemination of authentic Islamic education and the cultivation of exemplary character.

The period 1944-1964 was the time in which Sheikh Ibrahim Saleh struggled to make his mark in the fields of Qur’anic studies, religious sciences, as well as in the acquisition of other branches of knowledge including logic, philosophy and rhetorics. His search for grounding and expertise in Qur’anic sciences started at his family compound, and blossomed to other renowned institutions of learning popularly referred to as Tsangayoyi (singular, Tsangaya) in Maiduguri and its environs. His fame for excellence in the recitation of the Qur’an soon spread like a bush-fire in all the places where he sojourned in pursuit of its knowledge, such as: Tarmuwa, Gulumba, Gide, Maishumari and Maiduguri. He became easily distinguishable and traced to his family, even by scholars meeting him for the first time, as a result of his good character, depth of learning and his diction in Qur’anic recitation.

There were many erudite scholars who made positive and lasting impressions on Sheikh Ibrahim Saleh while he was growing up as an itinerant student. These included some of his teachers such as: Sheikh Muhammadul Habib, a grandson of Sheikh Ahmad Al-Tijani on a visit to Maiduguri from Algeria, Sheikh Muhammad Mustafa Alawi, Sheikh Al-Kadi Lari Abani, Sheikh Mustafa Birshi, Sheikh Ahmad Ali Abulfathi, Sheikh Gibrima Dagira, Sheikh Tijjani Usman, Sheikh Abubakar Atiku and many others, too numerous to mention individually here.

One of the most interesting methodologies for effective learning that was discovered early enough by Sheikh Ibrahim Saleh was that, every student wishing to be a scholar, must identify certain types of scholars from among the past generations, and strive to emulate them. Consistent with this strategy, he deliberately set out to emulate and mould his life in the images of Al-Ghazali, Al-Hafiz bin Hajaral Asqalani in respect of Hadith; and Abdulwahab Sha’arani in terms of sheer volume of scholarly production, as well as according respect to the efforts of other contemporary scholars. The influences of these great Muslim scholars on the life of Sheikh Ibrahim Saleh are so glaring for all to see.

Unlike most of his contemporaries, Sheikh Ibrahim Saleh has maintained the uneasy balance between the adoption of modern approach to religious scholarship, and embracing the age-old Islamic tradition of evaluation and certification of scholars. It was in this context, that his attempts to compare notes and rob minds with other scholars, as well as to submit himself to them for rigorous scrutiny, have taken him to many prestigious centres of Islamic scholarship and learning far beyond the shores of Nigeria and the African continent.

For instance, in 1963, Sheikh Ibrahim Saleh went to Saudi Arabia for the first time, with the intention to perform the Hajj and also to obtain the necessary certification (or ijaza) in the fields of Hadith, Qur’anic recitation and other branches of religious knowledge. He met with some of the most respected and well-acknowledged scholars in the areas, such as: Sheikh Umar bin Ali Al-Faruq Alfullati, Sheikh Alawi bin Abbas Al-Maliki, Sheikh Muhammadul Arabi Al-Tubbani and Sheikh Hassan bin Ibrahim Al-Sha’ir. They all found him worthy enough for their certification. Similarly, in Egypt, Sheikh Ibrahim Saleh received the necessary approval in the field of Hadith from Sheikh Muhammadul Hafiz, and in other fields including Qur’anic recitation from Sheikh Mahmud Khalil Al-Husari and Sheikh Amir bin Usman Al-Sayyid. His other teachers who attested to his competence in Hadith included Sheikh Ahmad Nur Al-Barmi from Pakistan, Sheikh Muhammad Zakariya bin Yahya Al-Khan Dahlawi from India, and the famous Sheikh Ibrahim Nyass from Senegal.

It may be gratifying to know that Sheikh Ibrahim Saleh spent only two decades (1944-1964) as a student, and he underwent all his training in Nigeria. However, this does not mean that all his teachers were necessarily Nigerians. But still, he was a homemade scholar, produced locally through the mechanism of the Tsangaya system, but proudly of international standard! It was the local training he received that provided him with the requisite competence and the confidence to compete internationally, and be recognized with respect as an excellent scholar.

Although Sheikh Ibrahim Saleh is almost at home on any aspect of religious knowledge, he still considers himself stronger in the fields of Hadith, Usulul Fiqh, Ilmul Kalam and Tafsir. For instance, if any verse of the Qur’an is recited, he can be able to tell if there is any hadith in connection to it. He can be able to narrate what the Prophet (SAW) or any of his companions said on it. He can be able to explain the surrounding circumstances for its revelation. He can be able to state if it has been repealed by means of other verses or hadith provisions. These are the issues that scholars referred to as: an nasikh wal mansukh or asbabul nuzul. He can also be able to provide all these details on any verse of the Qur’an except where human weakness fails him.

Besides those fields as enumerated above, Sheikh Ibrahim Saleh has also paid considerable attention to the study of Tauhid and Fiqh. He has read most of the important literature available on tauhid. He also understands the basis and nature of differences among the various Schools, the logic of the field and its variant strands. Fiqh of the Maliki School is also a familiar ground to him. There are very negligible issues on which he may have to open a book before he could give a sound verdict. He knows the Maliki School as well as the other Legal Schools. He is fully aware of the basic issues on which the others either differ or agree with the Maliki School. This is as a result of his continuous interactions with scholars and followers of the other Schools.

In 1963, Sheikh Ibrahim Saleh served to coordinate the project of the Northern Regional Government, which sought to incorporate the Tsangaya schools into the modern education system, in Borno Province. When the Borno State Government established the Borno College of Legal and Islamic Studies (BOCOLIS), he was appointed to assist in designing its academic programmes. And later became member of the school’s Governing Board. However, from 1984 to 1990, he served as Chairman of the Governing Board. But in 1990, he was reassigned to serve as Chairman of the State Pilgrims Welfare Board. He occupied his new office for about two years, and was later returned to his former position in BOCOLIS as Chairman of its Governing Board.

Sheikh Ibrahim Saleh has also maintained very cordial relations with successive governments at the federal level since 1976. He was a regular member of all the committees established to advise or guide government on some of its policies that had religious implications or relevance. He was also a familiar face on all government delegations of religious leaders sent to some Arab and Muslim countries such as: Saudi Arabia, Iran, Egypt, Turkey, Libya, Morocco, Malaysia, Indonesia, Pakistan, Senegal, Iraq, Sudan, etc. He has also been invited severally to conduct Tafsir at the State House, Lagos, during Ramadan, by different Heads of State. He has been in the forefront of the initiatives to strengthen Muslim unity and inter-religious dialogue for peaceful co-existence in Nigeria and abroad.

His main areas of academic interest and research, in which he has written more than four hundred (400) books and pamphlets, as well as more than one hundred (100) commissioned conference papers, all in the Arabic language, include: Qur’anic sciences, Prophetic Traditions, History, Philosophy, Islamic Jurisprudence, Astronomy, Arabic Literature, Linguistics, Science of Sufism, Islamic Polity, Islamic Law of Personal Status & Inheritance, Peaceful Co-existence between Nation States, and many other sundry issues that boarder on the essence of humanity and personal liberty.

Apart from his numerous engagements with teaching and research, Sheikh Ibrahim Saleh also headed or participated in the activities of various National and International Islamic Organizations over the years. He is:
1. Chairman of Fatwa Committees of both the Supreme Council of Islamic Affairs (SCIA) and the Jama’at Nasril Islam (JNI).

2. Chairman of Assembly of Muslims in Nigeria (AMIN).

8. Member Executive Council of International Union for Muslim Scholars (IUMS), Ireland (with Headquarters in Doha til 2010);

9. Chairman Financial Regulation Advisory Council of Experts (FRACE), Central Bank of Nigeria (CBN). He is the Chairman of the Department of Islamic Commercial Jurisprudence, (CBN) since 2012.

12. Member Board of Trustees Organization of Islamic Propagation (Sudan)

Sheikh Ibrahim Saleh has numerous students and disciples across the Muslim and Arab countries looking up to him for religious guidance and the promotion of scholarship. His followers are always in constant touch with him on all aspects affecting their lives. Some of his pamphlets and books were written in direct response to some of the legal and/or doctrinal issues they raised to him, from time to time. As a result, and in recognition of his contributions to Islam, and his continued efforts for peaceful co-existence among people of differing identities, Sheikh Ibrahim Saleh has been honoured with some National and International Awards. These included the following:

2. Certificate of Merit and Award of Honour on Islamic Da’awah, presented by Abi Alnnour Islamic Foundation and the Supreme Council for Islamic Affairs, Syria, 1997.

3. First Class Award of Pioneering in the Service of the Ummah (Wisam Elriyada), presented by the Leader of the Libyan Revolution, Col. Mu’ammar Gaddafi, Libya, 1998.

6. First Class Merit Award on Writing (Afro-Asian Writer of the Year 2004), presented by the Afro-Asian Association of Egypt, Cairo, 2004.

7. Commander of the Order of the Niger (CON), presented by the President and Commander-in-Chief, of the Armed Forces of the Federal Republic of Nigeria, Abuja, 2008.

8. Doctorate Degree OF Science (HNORIS COUSA) Conferred On him, at the 3RD Convocation Ceremony of the Nigerian Turkish Nile University, Abuja, On Saturday, 13TH June 2015.

Sheikh Sharif Ibrahim Saleh Al-Hussaini is a Nigerian scholar of international repute. He believes in the establishment of equity, fairness and justice among all peoples of the world, despite their differing identities. He abhors the bullying of the weak by the strong. He does not believe that nation states should be punished for the misdeeds of their leaders or the misconduct of some of their wayward citizens. According to Sheikh Sharif Ibrahim Saleh Al-Hussaini, for Muslim nations and communities to achieve the desired Islamic order and flourish without any hindrance, there must be sincere cooperation and mutual respect among some four important segments of society, namely: scholars/ preachers, the youth (males and females) Businessmen and people in authority.